History of the Iberia Academy

The date was April 23, 1891 and the Articles of Agreement was written and signed by citizens of Missouri, residing in Miller County. Article One stated: "The name of this institution shall be called IBERIA ACADEMY" and thus began the saga of this wonderful school often referred to simply as IBERIA.

The real story began two years prior in 1889 in Galesburg, a small college town in Illinois, the home of Knox College. George Byron Smith and Mabel White were members of the senior class at Knox in 1889. He was a native of Princeton, Illinois, born on 7 June 1865, a son of Mr. and Mrs. Samuel J. Smith. Mabel White was a native of Macomb, Illinois. After their graduation, they married and ventured out into the world hoping to find a place to call home and where they could give of their talents as educators.

While on a train heading westward through the countryside of Illinois, Byron and Mabel engaged in a conversation with a traveling salesman (drummer) who was traveling with them in the coach. Byron spoke of his desire to find a place where he and Mabel were needed as teachers. The drummer informed him of a place in the foothills of the northern Ozark Mountains which "had some little cabins, some old women smokin' corn-cob pipes and some grown men playin' marbles to help 'em forgit they're alive. Son, when you reach that place, you will know you have reached Iberia, Mizoury."

Professor and Mrs. Smith set out on a night train out of St. Louis and arrived in Crocker, Pulaski County, Missouri in the early hours of the morning. They began a long, tiresome drive across what seemed like a thousand hills until, at last, they came to a halt on the crest of a hillside and looked over into the beautiful valley where the little village of Iberia sprawled here and there across the center of the valley.

The Smiths began their school in the fall of 1890 in an old school that had been used in the past, but was then deserted and unused. The first year they had only one student who qualified for Academy work and a handfull of elementary-age children, but they were given their full attention and were taught thoroughly. Professor Smith taught Natural Sciences, Languages, and Higher Mathemetics. Mrs. Smith taught Literature, History, and Civics. They had no library and very few items pertaining to scientific apparatus. The schoolyard was small, about one acre, and unfenced. Later, more classes were added including Departments of Music, Science, Literary, Classical, Normal, and Business Courses.

The hill people of the Iberia area were poor folk in the late 19th century, therefore a low tuition was charged so everyone who wanted an education could afford it. In 1890, the full term tuition was $6 for the Academy while the Common School charged $3 for the Primary Department; $4 for Intermediate Department and $5 for the Advance Department. Board could be had for $2 per week. By 1910, the tuition had increased to $9 yearly and board was secured at the Ladies Hall for $1.85 weekly. Self-boarding students often found rooms in town for 15 cents per week.

In 1907, a new building was erected as a boarding home for the girl students. It was christened "Alumni Hall" and was dedicated by Mrs. Stella Moore Garner, the Academy's first graduate (Class of 1893). It was built at the total cost of $10,000. It had a parlor and a music room, which was used by all the girl students. Many young men, who roomed in town, took their dinner at Alumni Hall also.

A second dormitory was on the campus, called Girls Cottage. It was a six-room house used by the girls who wished to board themselves. Mrs. Samuel Smith, mother of the Professor, acted as matron to the residents. The girls brought their own food from home and used the large kitchen in common.

The school had its own campus newspaper called THE ACADEMY STUDENT which coincided with two other papers printed by the literary societies, THE INDEX and 'THE CAD. The Literary Societies, formed during the early years of the school, were the Atheneum, Academy Debating Society, and the Philorhetian. 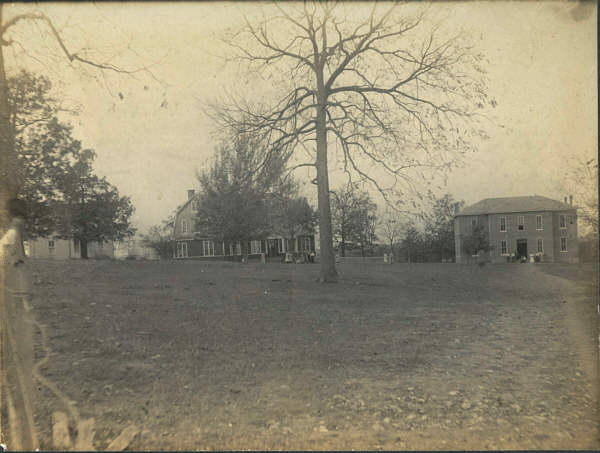 In 1912-13, the Academy and campus encompassed twenty acres, including an athletic field and three good buildings. The Academy building contained five recitation rooms, a chapel, library, and two laboratories. Alumni Hall was a well-built dormitory, which contained a parlor, music room, dining room, kitchen, china closet, and three rooms for Professor and Mrs. Smith on the first floor. The second and third floors were dormitory rooms for the young ladies and female teachers. The Girl's Cottage had a kitchen and several rooms for the girls to live in. Alumni Hall had a furnace, but the cottage was heated with ordinary wood-heating stoves. 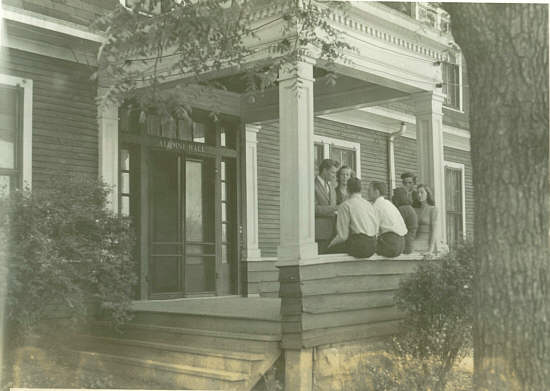 Both girls and boys eat in the dining hall of the Girl's dormitory.

The library, by 1915, had an inventory of over 7,000 well-selected and catalogued volumes. It also had a reading room where many of the best periodicals and newspapers were stored and opened daily for the use of the students.

The Academy was in great shape in 1917; their debts were paid; the buildings were among the best in the country. On October 30th, a great calamity occurred....a destructive fire destroyed the main Academy building. For quite sometime the fire threatened to spread to the other buildings, but men were stationed on the roofs of the other buildings and kept the structures saturated with wet quilts and buckets of water. The hand of God intervened on behalf of the Academy when the area was deluged with frozen rain and snow. I believe that had not the heaven-sent rain and snow fallen, the entire campus would have perished for there was not the necessary equipment available in those years to hold back a raging inferno. In 1939, much of Iberia's downtown area was destroyed by a great fire and could not be held back nor controlled. 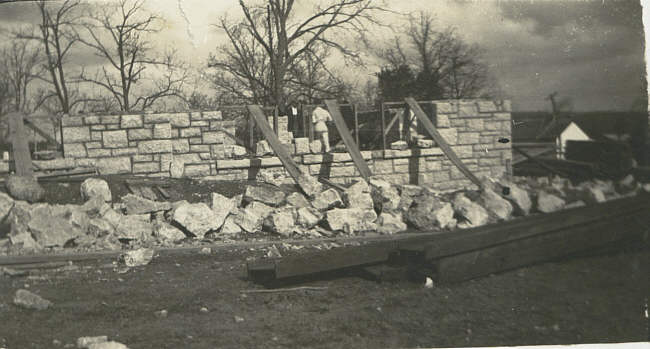 The new Academic building was built and dedicated in 1920. In May, the cornerstone was laid with special services on campus. It took the joint effort of the townspeople, the Alumni, and Professor Smith to make this new building a reality, but they did join forces and with the untiring task of fund raising, a beautiful new Academic building was erected and still stands on the campus today, even though it is deserted and neglected in the 21st century. 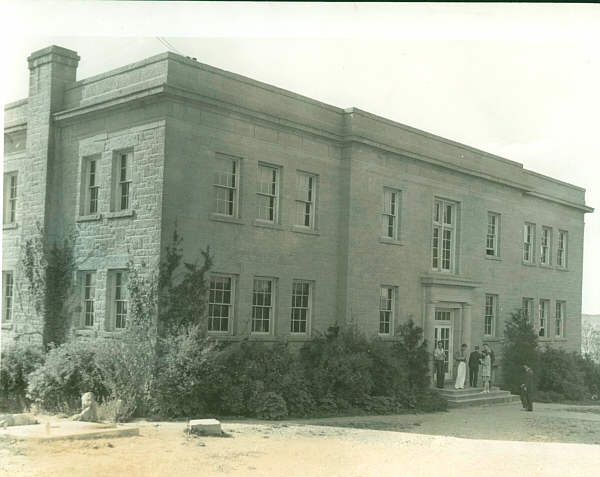 A general view of the administration and class room building.

A gymnasium was built in 1926, christened Martin Gymnasium, named in honor of Charles Martin of Webster Groves, Missouri, one of the faithful friends of Iberia Academy. It was built entirely of native stone, cut from the Academy's own quarry and built by many of the students who were instructed in stonemasonry. 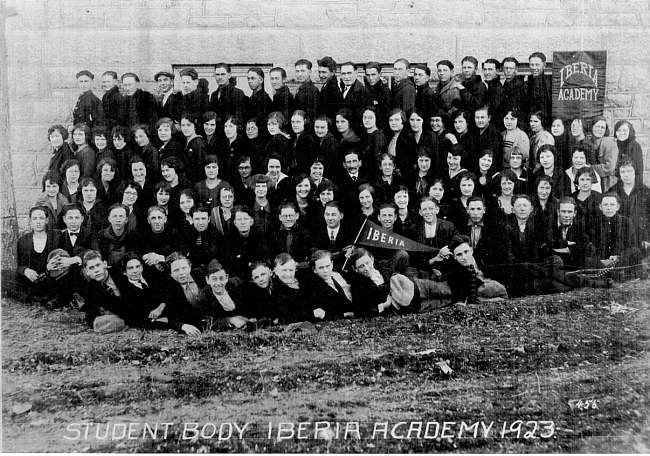 In 1932, Mabel White Smith died at her home on campus of Iberia Academy. This marvelous team of dedicated teachers was split by death. Sadness was felt by the many friends and students who had known her. She left an endowment of $3,000 to the school and it was used to beautify the campus with shrubs and fruit trees. She had loved the spacious landscape of the school and had planted many roses and shrubs herself before her death.

In 1945, Professor Smith, who by this time was an aged man, decided to retire after having spent the past 55 years of his life at Iberia. I am sure he wanted to spend every hour possible at his beloved school, but his health was failing. Reluctantly he left Iberia Academy and returned to his home in Princeton, Illinois. The school was converted to an agricultural 'Conservation College' in the late 1940s, but was a failure. The plan to change Iberia Academy was deeply opposed by Professor Smith, but a new board of directors was chosen and they proceeded with plans to make the school a 'new kind' of college. It was a good idea, but did not work in those years.

The last commencement of the old Iberia Academy was held June 1, 1951. It was the only one in the history of the school that Professor Smith did not attend and only death prevented his presence. On June 15, 1950, eight days after his 85th birthday, death claimed him at his home in Princeton. Thus ended a life of Christian unselfishness and dedication to the needs of the children of Iberia and surrounding community.

The structures are still standing today...the Administrative building is empty, just begging to be recognized once again. If her walls could speak, I am sure they would say.......... 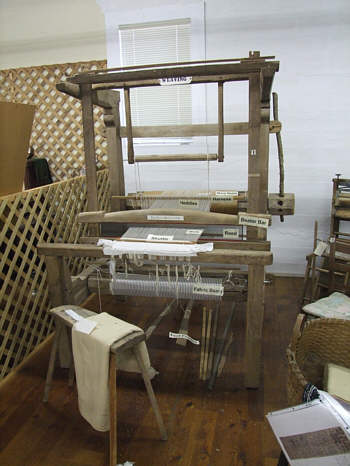 This loom, from the weaving cabin, is on display in our museum. 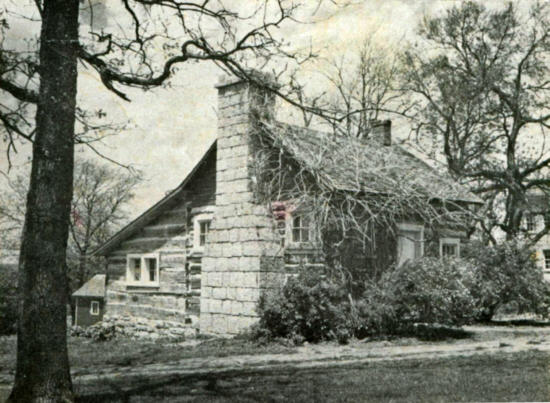 This was the original building on the Academy campus and in 1890 was occupied by a Negro family. Later it was purchased, with three and one-half acres of ground, to be added to the campus. Many of the girls of earlier times remembered it as "Home, Sweet Home", where the laundry was done. In 1926 Mr. W.H. Danforth gave money for the reconstruction of the cabin, and it was named the Adda Danforth Cabin in honor of his wife. In 1937 a room was added to it, the logs of which had been used in the first building erected in this community. This was about a mile and a half out of what is now Iberia, and it housed the first post-office, one part of the house being devoted to the family and the other to the slaves. The original map published in 1818, once hung in the cabin. It designated this region of the Ozarks as New Iberia. The house later contained five looms used for weaving. The girls made a wide variety of objects which found a ready sale, among them rugs, curtains, purses, scarves, ties, bags and table runners.

Three Apparitions at the Battle of Dug Springs

History of the Battle of Dug Springs